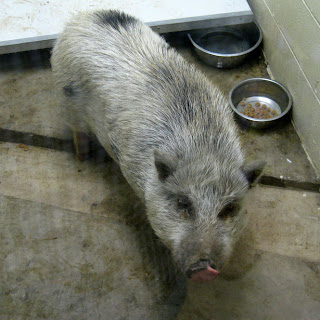 Misty called me at work yesterday morning and frantically exclaimed, "I saw it! I saw the pig!"

For the past couple days we've been hearing about a huge pig roaming around near our neighborhood. A substitute teacher from Emily's school even captured a picture of it as it passed by her home, and posted it on Facebook. So when Misty saw it trotting along Morgan Road as she drove Emily to school, she was thrilled to be part of the excitement. You'd have thought she'd spotted Bigfoot.

On my way home that afternoon, I passed Hope Animal Clinic and saw posted on their marquee: Did you lose a pig? Obviously they'd captured it and put it in one of their kennels to keep it safe. Since the girls were all keyed up about the pig, I took them by the clinic to see it.

The tales of its size were not exaggerated. This thing was huge. Either bravely or foolishly, I got into the room with the pig to take some pictures. His hair was stiff and bristly like a broom, and he was really heavy. He kept trying to bite my legs -- thank goodness I was wearing jeans. The girls thought he was gross (and I'm inclined to agree with them).

While we were there, a local mail carrier stopped by and recognized the pig. She said she'd go let the owners know, guessing that they likely weren't even aware that it was loose.

The whole thing was pretty funny. I turned the incident into a story on al.com.
Posted by Unknown at 7:00 PM
Email ThisBlogThis!Share to TwitterShare to FacebookShare to Pinterest