We Are Alabama: Coming to grips with last week's tornadoes 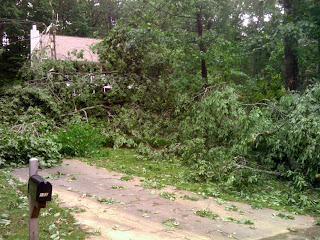 Thanks to those who have expressed their concern over us here in Alabama. Our family is fine. Our home suffered little damage beyond losing power for a couple days. After seeing what other people went though, I am immensely thankful of how minor our troubles were in comparison.

This graphic is the best I've seen at showing just how widespread the Alabama tornadoes were last week.

You can see one path of an EF-3 along I-459 that passed within half a mile of our house. That was the first one that came through around 5:00 Wednesday morning. The sirens woke us up just in time. We had our windows open and went to shut them since water was flying into the house, and the wind hitting us was scary. The news said that particular storm was moving east at 70mph, and it came and went really fast. Our neighborhood came through pretty well, but the neighborhood behind us got pretty torn up. The pictures posted here show some of the "minor" damage that occurred there.

We drove up to Cullman on Saturday to deliver batteries to Misty's family (there are no batteries to be found there, and none of the gas stations had opened yet -- in fact, we had a hard time finding batteries in Birmingham). All along the way up I-65, you could see paths where tornadoes had cut through and snapped power lines, bent light poles double, uprooted huge trees, and taken the roofs or sides off buildings. It smells like Christmas with all the broken pines.

Misty's aunt and uncle actually saw the Cullman tornado pass by as they were headed to a storm shelter. Aunt Wanda remarked that it was odd that so many birds were flying around it. "Those aren't birds," Uncle Mike told her. "That's debris."

Downtown Cullman was a mess. Lots of historic homes were destroyed. The National Guard was out on every corner. But the damage in Cullman is nothing compared to a lot of other places in the state. And everyone who's actually been to Tuscaloosa, Pratt City, Hackleburg, etc., says it's much worse in person than you can tell from the photos. 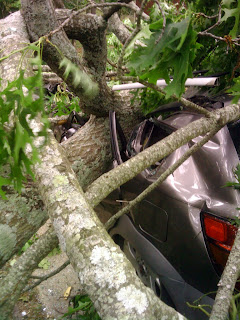 Our church spent Sunday afternoon putting together relief packets of non-perishible food. We distributed 500 bags to Jacksonville, AL. Apparently there's a huge demand for ice everywhere -- folks are trying to keep some bit of their food chilled in coolers. People are also asking for stuff like bug spray, sunscreen, and dust masks.

One of our bloggers on al.com (who writes a "good news" blog) is a journalism professor in Tuscaloosa. Her house was ripped up pretty badly, but not destroyed. Yesterday she found a body in her yard. Even beyond the cleanup and (eventual) rebuilding efforts, there are hundreds of people still unaccounted for.

Emily finally got to go back to school today. Huntsville schools aren't opening until Thursday. The Huntsville Times (who themselves were operating without power and updating readers through Facebook and Twitter with their cell phones) has been listing businesses that are open since it's easier than listing the businesses that are closed.

This is far from just a single-city disaster. Alabama has been decimated almost statewide. We're working to keep the information rolling out to people with extensive coverage on al.com. Our affiliate newspapers are churning out updates like crazy. Many residents are just getting their power back on (or still won't for another couple days), and they're just learning of how bad it is everywhere.

Please keep those who have lost family members or their homes in your prayers.
Posted by Unknown at 6:00 PM
Email ThisBlogThis!Share to TwitterShare to FacebookShare to Pinterest