Muddled plans lead to the perfect twist of fate

While the rest of Alabama was getting ready for college football, Emily and I headed out for a very special Daddy-daughter date to see "The Amazing Spider-Man."

To be fair, this was not Emily's idea.  In fact, she told me she was not interested in seeing Spider-Man.  Nevertheless, she agreed to go, and I was very happy to have her company.

At first, things didn't seem to be panning out so well.  I had to finish laundry, vacuuming, and some work on al.com before we could leave the house, and by the time I got everything taken care of, we'd missed the first show we'd planned to attend.  We were also pretty hungry by now, but we had three hours to kill before the next show.  I decided to take Emily to Chick-fil-A because it's her favorite and I knew she'd at least be happy climbing in the play area for a while.  After that I figured we'd hit the library to fill the remainder of our time.

When we finished eating, I watched through the window as Emily enjoyed her play time.  All of a sudden, I saw her eyes get big and her jaw drop.  Another little girl ran into the room and she and Emily hugged each other.  It was Abby, Emily's best friend from kindergarten.  The two hadn't seen each other for a year and a half, but time could not break the bonds of friendship.  They were so excited to see each other (even if Abby couldn't remember Emily's name at first), and we wound up staying at the restaurant for an hour and 45 minutes so the girls could play together.

I would have let their reunion go on for as long as they wanted -- happy to skip the movie if it meant Emily and Abby would have more time with one another -- but Abby's grandmother said they needed to get going.

As for the movie, Emily said she liked it even though she hid her eyes during some scary parts with the Lizard and the kissing scenes.  Even though it wasn't how she would have designed the day for herself, it turned out perfectly because of our chance encounter with her old friend. 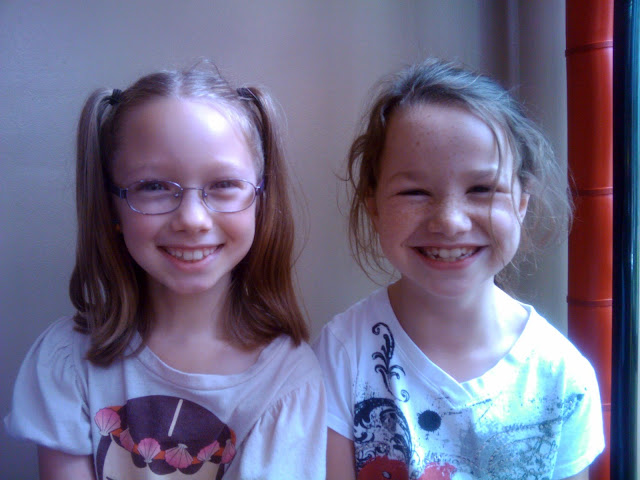 Posted by Unknown at 7:55 PM
Email ThisBlogThis!Share to TwitterShare to FacebookShare to Pinterest