Giving thanks for ice cream and cheap movies 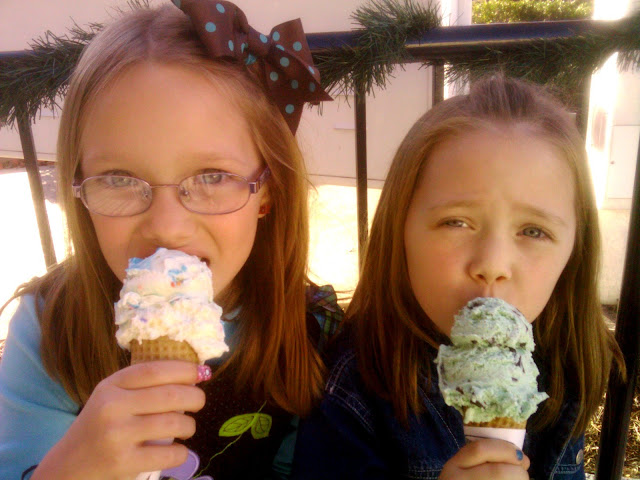 We capped off the Thanksgiving break with another trip to the movies -- this time to see "Diary of a Wimpy Kid: Dog Days" at the $1.50 theater.  Emily's been reading the books and has really enjoyed them.  I wondered if it would be difficult to follow the sequel having not seen the first movie, but we had no problems.  It was a cute family comedy, and we had fun.  Also, it turns out that it was actually the third movie in the series.  I had no idea.

Afterward Misty surprised us by swinging into Brewster's for ice cream cones.  Emily had birthday cake ice cream, Kendall had mint chocolate chip, Misty had Chocolate Lover's Trash, and I had almond chocolate coconut.  We were surprised by how many other kids also ordered mint chocolate chip.  Four or five kids in line after Kendall picked the same thing, and she was convinced they were copying her.  I think it's more likely just a popular flavor, but again, I had no idea.

It was almost the perfect end to our weekend, but on the way out of the parking lot, Emily made the mistake of taking a small sip from a water bottle that her sister thought should have been hers, and something snapped inside of Kendall.  What resulted was an outpouring of tears and rage that lasted the rest of the way home.  A less experienced parent might have assumed that she needed a nap, but if you've spent extended time with a five-year-old, you'll know that they are not tired!  And how dare you suggest such a thing?
Posted by Unknown at 6:28 PM
Email ThisBlogThis!Share to TwitterShare to FacebookShare to Pinterest

The payout for this wager if the chosen quantity wins is 392 chips, in the case 블랙잭 of a $1000 straight-up most, $40,000 wager, a payout of $392,000. The participant's wagered forty chips, as with all winning bets in roulette, are still their property and in the absence of a request on the contrary are left as much as} presumably win again on the subsequent spin. Roulette is an intriguing and sophisticated sport of likelihood, and MotorCity Casino Hotel is proud to offer roulette in two variations.