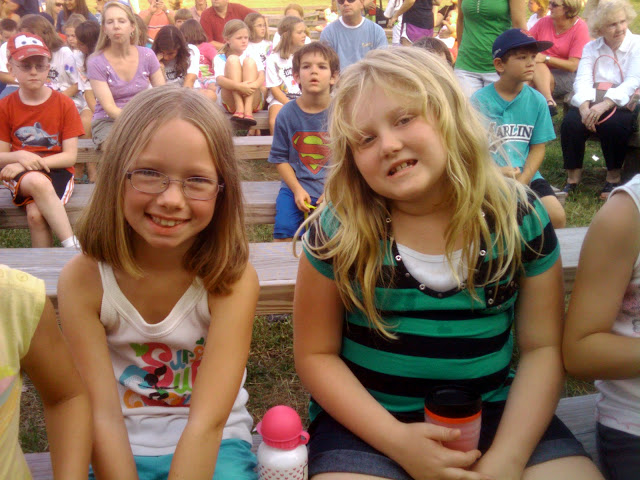 Last night was Emily's final night at Stoney Creek Camp, and we drove up to Cullman to see what she and the other girls in her cabin had put together for "skit night."

Skit night is no small affair. If you think you're getting in and out of there in 30 minutes, you've got another thing coming. First the kids lead the crowd in a bunch of songs; then there's a devotional; then there are personalized awards given out for every single camper; then each cabin shows off their group cheer; then the camp counselors get awards... THEN they get to the skits. It's like Ryan Seacrest repeatedly teasing the audience about who's going home tonight on American Idol -- only this takes place outside in 100-degree heat. 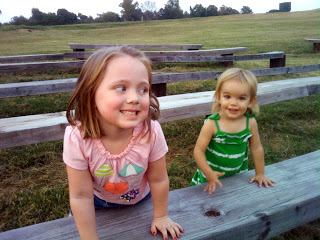 With 8 different cabins, the skits were all over the map. There was a group that sang "So Long, Farewell" from The Sound of Music. Another group's skit involved a talking goose that dispensed advice. The crowd favorite seemed to be a skit that revolved around a support group for recovering bubble wrap popping addicts (believe it or not, it was a surprisingly mature subject matter for a group of young girls).

For the skit from Emily's cabin, eight girls hid under a sheet pretending to be a centipede.  The joke at the end was something like, "oh no, I think the centi peed."  Earlier in the evening Emily had received the "cute comedienne" award, so I wondered if that bit of humor came from her.

During the production, Kendall ran around and played with other kids who weren't yet old enough to attend camp themselves.  When it was all over, Kendall asked Emily if she would please come home a night early because she missed her so much.  It broke her little heart when Emily declined.  But at least by wanting to stay, it's clear that Emily has had a good time at camp.
Posted by Unknown at 7:30 AM
Email ThisBlogThis!Share to TwitterShare to FacebookShare to Pinterest