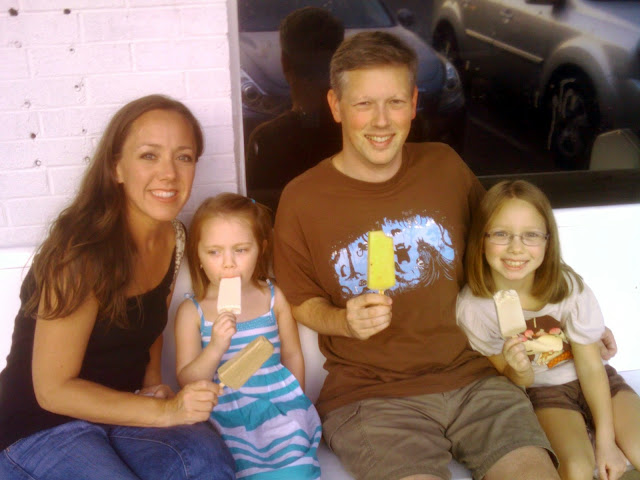 After being tempted on at least three other occasions, I finally gave in and tried the peanut butter burger at Mugshots.  Since peanut butter was the only topping, I opted to add jelly, making me feel like a kid ordering some bizarre, but comforting, concoction.  Numerous words of praise I'd seen for peanut butter and jelly burgers gave me high hopes though.  Some people had even recommended adding bacon, so I did that too.

In the end, it was good, but not great.  At Mugshots, I'd grown accustomed to blissful sighs of happiness with every bite of my usual order of their MacDonald burger.  So switching to the peanut butter burger led to somewhat unfair disappointment.  Even the fries didn't taste quite the same, but since Misty loved hers, I'll chalk that up to the possibility that French fries just don't go well with peanut butter and jelly.

After Mugshots, we tried a new place for dessert -- Steel City Pops.  This little shop in Homewood serves up frozen treats on a stick (normal people would call them "popsicles," but technically that's a brand name), and it was packed with people both inside debating over flavors and outside enjoying their cool snacks.

Steel City Pops has some unique flavors on their menu -- stuff like cantaloupe, avocado, or blood orange.  But even with exciting choices like those, Kendall ordered vanilla bean, Emily picked peanut butter, and Misty opted for coffee.  I felt that a "plain" flavor defeated the purpose though, so I selected pineapple jalapeño.  I have never had such a spicy popsicle (see, even I did it, I called it a popsicle).  It was great though, as was Kendall's simple vanilla, which I polished off for her in a welcome cool down for my tongue.

It was still light out, so we stopped by Homewood Park to let the girls play for a while.  The Movies in the Park series was getting ready to begin, so it was plenty crowded there too.  The movie actually helped us out, since when it began a police officer came along herding all kids out of the playground -- that made it much easier to convince our own kids that play time was indeed over.  It was a nice relaxing evening to end another stressful week.
Posted by Unknown at 10:05 PM
Email ThisBlogThis!Share to TwitterShare to FacebookShare to Pinterest