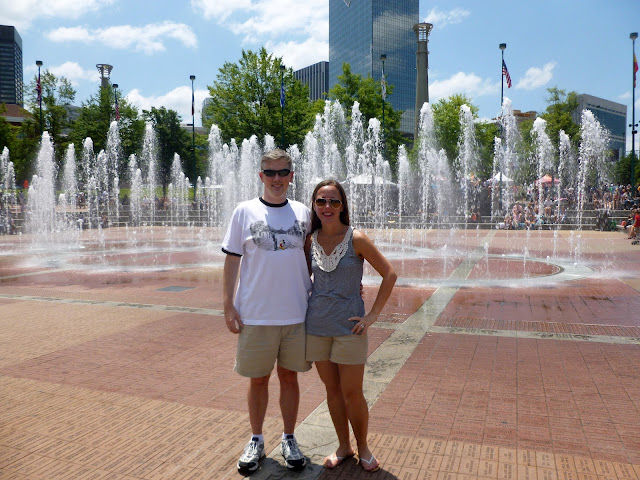 I hadn't been to Atlanta's Centennial Olympic Park since it first opened, so with the Olympics coming up this summer I thought I'd take my girls there as a way of getting them excited about the games.  Oddly enough, neither of them wanted to go. 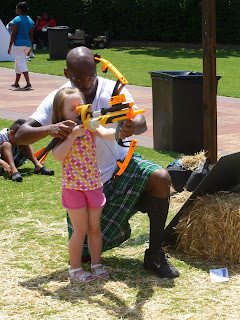 I thought surely my use of the word "park" coupled with "fountains you can jump in" would get them excited.  No such luck.  It wasn't until they found out that the park would also be hosting the "Brave Highland Games," based on the new Disney-Pixar movie, that they relented and decided that this outing could have the potential for awesomeness.

The Brave Highland Games was advertised to include "archery, caber toss, hammer throw & sheaf toss."  What that actually meant was Nerf archery, flipping over a foam pole, flinging a giant wad of paper with a rake, and tossing a ball at a set of bottles -- all hosted by guys in kilts.  And yes, to a pair of little girls, those things are indeed awesome.  Emily and Kendall had a good time "competing."

In between the different games, we watched one of the aqua-choreographed shows at the Fountain of Rings, and the girls got soaked running through the spouts of water.

Unfortunately, my niece Miriam wanted to spend most of the outing from within the confines of her stroller.  Most likely she was worn out from a full day of playing the day before, trying to keep up with her older cousins.  And the day before that she'd been on a flight that didn't land until 3:30 a.m., so she was understandably wiped out.

Also, I don't think the "Olympic" aspect of the park had any impact whatsoever on the girls -- even though they got to compete in their own Olympic games of sorts.  NBC, you've got your work cut out for you in grabbing my kids' attention next month. ... Unless there's maybe a new category for Olympic fountain splashing. 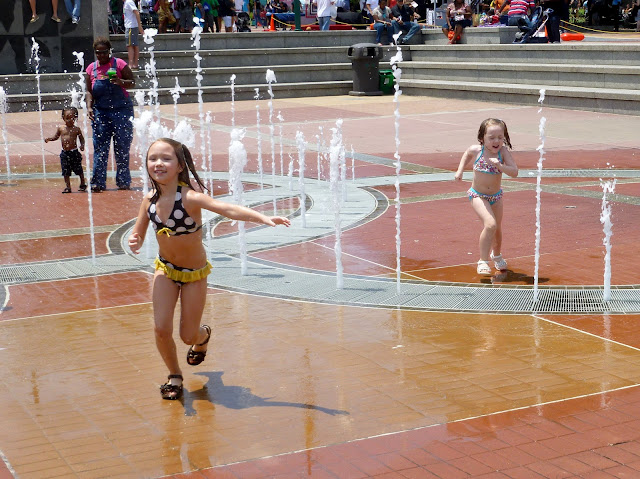 Posted by Unknown at 10:43 PM
Email ThisBlogThis!Share to TwitterShare to FacebookShare to Pinterest