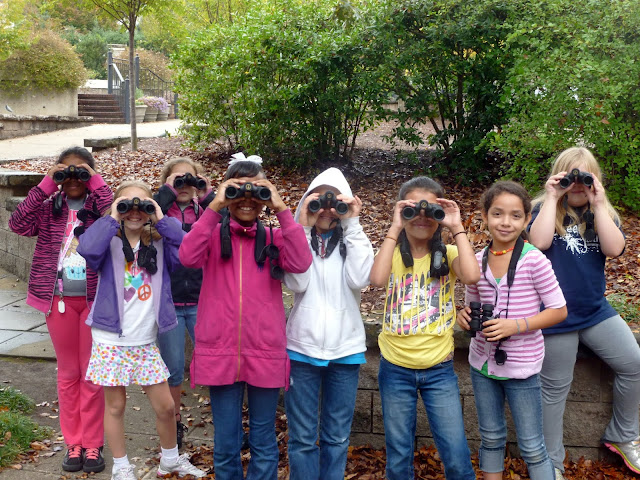 Today I helped chaperone a field trip to the Birmingham Botanical Gardens with Emily's school.  Less than 10 minutes into the bus ride, a girl on the seat across from me already had a bloody nose, having been caught in between two other girls roughhousing, so I knew it was going to be an adventure.

The two 3rd grade classes split up upon arrival at the Gardens, and the groups divided into boys and girls beyond that.  That put me with the girls from Emily's class.  On the first part of our tour, we all received binoculars and were accompanied by a couple members of the Audubon Society while we looked for birds. Our group spotted several species, but most of the kids had a hard time locating anything with their binoculars.  I was impressed by how patient they were, though.

For the second part of the tour, the boys and girls from Emily's class joined back together for a lesson on George Washington Carver.  We learned some of the 300 things he made out of peanuts, then got to see cotton, sweet potatoes, and peanuts growing in one of the gardens.  Again, I was impressed by how attentive and patient the kids were.  The guides had them all participate in a game that involved farmers growing cotton and peanuts and infusing nitrogen into the soil. 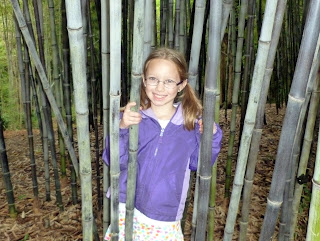 After lunch we had some extra time left, so everyone headed down to the Japanese garden.  The size of the koi in the pond just blew the kids' minds.  Here their 3rd grade selves finally began to emerge.  A pond, fish, a bridge, bamboo, and no lesson plan -- it wasn't long before they were running around in circles.

I'd mark the field trip as a big success.  Kids who hadn't been to the Botanical Gardens before were clearly impressed and didn't want to leave.  But even Emily, who's been to the Gardens on numerous occasions, reminded me that we need to visit there more often.
Posted by Unknown at 4:32 PM
Email ThisBlogThis!Share to TwitterShare to FacebookShare to Pinterest