Giant fireflies light up the streets of Atlanta 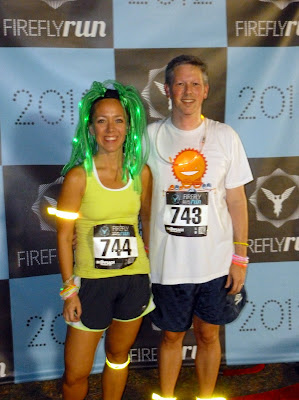 I nearly gave up on running in races last night.  Shortly after the first water stop during the Firefly Run 5K in Atlanta, I had to slow down to walk for a bit.  At the gym, I have no trouble maintaining my pace for 3.1 miles, yet in races I always seem to wear myself out quickly -- to the point where running feels awful.

I think I know what I've been doing wrong.  I've been trying to keep up with Misty.

With 4,000 other people running through the city streets in the dark and only one cell phone between the two of us, Misty and I tried to stay together.  In doing so, she had a hard time slowing her pace, while I had a hard time keeping mine fast enough.  We were repeatedly separated as she'd advance several paces ahead and other runners would begin passing me between us (luckily her green light-up wig made her easy to spot in the crowd).  But while Misty had to keep looking back and slowing down to let me catch up, I was struggling to stay with her.

And that's the problem.  I shouldn't try to stay with her.  As soon as we agreed to meet up afterward at certain spot, and instead ran at our own paces, the race became much more bearable.  Even running up the hills seemed easier.

I guess the only place I'm going to be able to run alongside Misty is at the gym -- where we can go our own paces while the treadmills keep us aligned.

The Firefly Run was a lot of fun -- a much better experience than The Color Run.  The temperature was perfect on an evening in early October, and the setting of Piedmont Park with the city backdrop was beautiful.  Lots of people got creative with glow-in-the-dark and light-up accessories, but the real treat was simply seeing the parade of colored lights we created as we moved through the streets en masse.  Drivers waiting in traffic honked and cheered as we ran down Peachtree Street.  I'll bet it looked even cooler to spectators (and judging from comments I could hear from people watching as we ran by, it did).

Misty's light-up wig was a hit.  Several people complimented her on it, and a few even asked her to pose for photos.  All of them wanted to know where she got it, and I think she relished the opportunity to repeatedly say the name of the web site -- FlashingBlinkyLights.com.

After the race ended (and Misty and I found each other with no problem), we didn't want to leave.  With everyone glowing in the dark, it was such a festive atmosphere in Piedmont Park.  It felt like there should have been a live DJ to spin a dance mix to keep the party going into the night.

We rounded out our evening with a trip to Grindhouse Killer Burgers, which turned out to be just across the street from another of our favorite Atlanta restaurants (Sheik Burritos n Kabobs, where we'd eaten the night before).  Our burgers and fries were great, plus we noticed the restaurant had a dog-friendly patio, so we'll definitely be back for a future visit.

We'll be back for another Firefly Run, too. 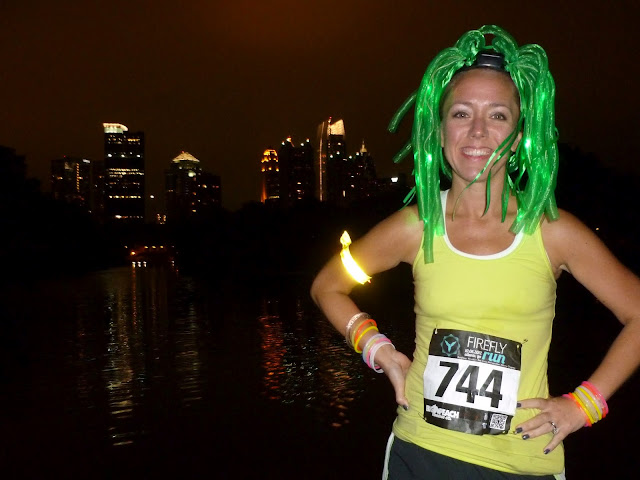 Posted by Unknown at 8:30 AM
Email ThisBlogThis!Share to TwitterShare to FacebookShare to Pinterest

That looks like fun! I miss running and fall weather ALWAYS makes me think that I need to start back at it.